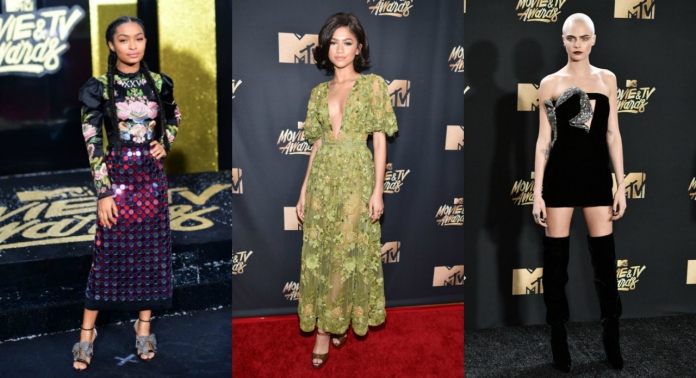 It’s all about sequins and embellishments on the red carpet of the MTV Movie & TV Awards 2017 yesterday! Plus, for the first time ever, this award show presented gender-neutral awards so yay for gender equality! Since it’s not as ‘prestigious’ as the Oscars, the stars are more relaxed or you can say have more fun with their red carpet outfits. Check out our top 8 best-dressed stars of the MTV Movie & TV Awards 2017.

The 17-year old star of Blackish, Yara Shahidi wore rocked one of GUCCI’s latest runway looks, making clashing prints look as edgy as it gets.

Not only she rocked the stage as Belle during the Beauty and the Beast medley during the opening of the MTV Movie & TV Awards 2017, she slayed the red carpet in this mini dress from Fausto Puglisi.

Winner of Best Actor in a Movie, Emma Watson stayed edgy in this asymmetrical sequined frock by Kitx.

Taraji P.Henson shined bright on the red carpet in this turtlenecked Emilio Pucci piece and she also won the award for Best Hero for her role in Hidden Figures.

Allison Williams went blond and all out sequin in this Galia Lahav Haute Couture dress which brought out her glowy fair skin even more.

Not many people can pull off the bald look with such charisma like Cara Delevigne, add the Saint Laurent dress she wore, she was the queen of edge on the carpet.

Zendaya not only slayed the Met Gala carpet, she’s killing it in this sheer floral embellished dress from Zuhair Murad.

Denim never looked so good on the red carpet, Mary Elizabeth Winstead is bringing class to denim in this sexy number from Jonathan Simkhai.