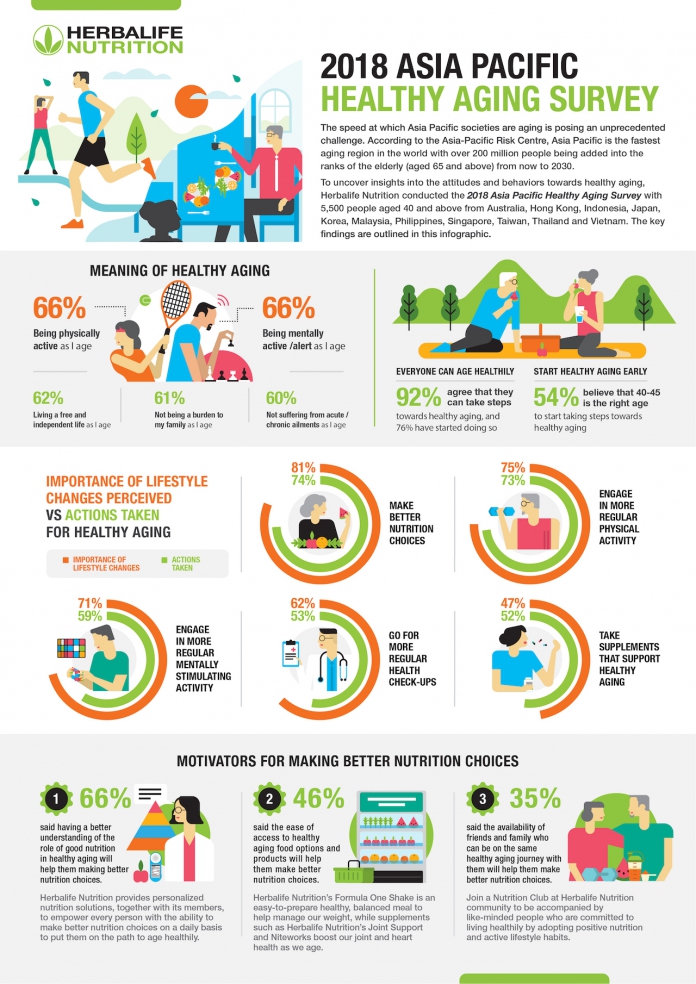 Herbalife Nutrition has recently released findings from its 2018 Asia Pacific Healthy Aging Survey, which was conducted in August 2018 with 5,500 respondents aged 40 and above in 11 markets including Australia, Hong Kong, Indonesia, Japan, Korea, Malaysia, Philippines, Singapore, Taiwan, Thailand and Vietnam. The survey uncovered insights into the meaning of healthy aging, the importance of lifestyle changes for healthy aging, as well as key motivators and influencers for healthy aging.

The survey revealed that 66% of Asia Pacific consumers define the meaning of healthy aging as “being physically and mentally active as I age”. While aging is an inevitable process, 92% of respondents believe that active steps can be taken to help them age healthily – in fact, 76% of them have already started taking steps towards healthy aging.

However, a much smaller group of Asia Pacific consumers believe that one should start healthy aging early, with 54% agreeing that the right age to start taking steps towards healthy aging is between 40 to 45.

According to the Asia Pacific Risk Center, Asia Pacific is the fastest aging region of the world with over 200 million people expected to move into the ranks of the elderly (aged 65 years and above) between now and 2030.

When asked about the most important lifestyle change to enable healthy aging, 81% of respondents chose “making better nutrition choices”, ahead of “engaging in more regular physical activity” (75%) and “engaging in more mentally-stimulating activity” (71%). However, a smaller proportion of respondents have taken steps to put these important lifestyle habits into practice, as shown in the table below:

Protein Undervalued for its Role in Supporting Healthy Aging

In terms of the type of supplements that Asia Pacific consumers are currently taking, the survey revealed that the majority of their supplement consumption centered around multivitamins (75 percent) and calcium (53 percent). However, only three in 10 are consuming protein as part of their supplement mix for healthy aging. With protein being a key nutrient that supports the development of muscles for healthy aging when combined with an active lifestyle, findings indicate the role of protein in supporting healthy aging is undervalued.

Family wields the most influence when it comes to healthy aging:

Family and friends also emerged as the main channel for Asia Pacific consumers to obtain healthy aging tips, with 51% turning to their family and friends, ahead of online media (49%) and TV (43%).