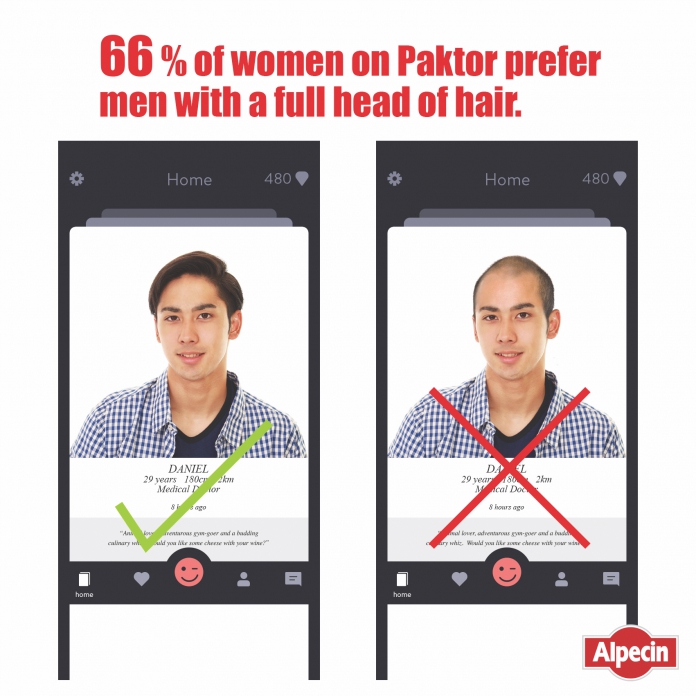 A social experiment conducted by Alpecin, Germany’s leading male haircare brand, has revealed that 2 out of 3 Malaysian women on an online dating application, Paktor, are more likely to swipe right to a man with a full head of hair.

In the two-week experiment, two profiles of the same person were posted in the online dating site – except one was doctored to show him thinning on top and the other with a full head of hair. Both profiles stated that the he was looking for love as a 28-year-old medical doctor who loved animals, was an adventurous gym-goer and a budding culinary whiz.

This may come as a shock to many as being a doctor has, more often than not, been dubbed as the most attractive job a man can have. This social experiment further illustrates that in the world of online dating a person’s photo is far more important than their personality profile.

The profile showing the man with a full head of hair received 2,260 right swipes compared to 1,160 received for the image showing him with thinning and receding hair.

Further hair-raising findings from Alpecin’s Baldness Calculator were that 1 in 5 Malaysian men are at risk of going bald by the age of 40. This could be due to not only hereditary hair loss but also other contributing factors such as stress and an unhealthy diet. Additionally, 31% of Malaysian men are seeing the beginnings of a receding hairline before the age of 40.

As 2018 advances, it is still apparent that the notion about hair loss and thinning hair remains the same, and whether online or offline, people draw inferences about someone else’s personality based on appearance all the time. This underscores the importance of protecting one’s hair in ensuring they do not get swiped to the twilight zone in the world of dating.

Read also: 8 Ways to Prevent & Stop Your Hair from Falling Out