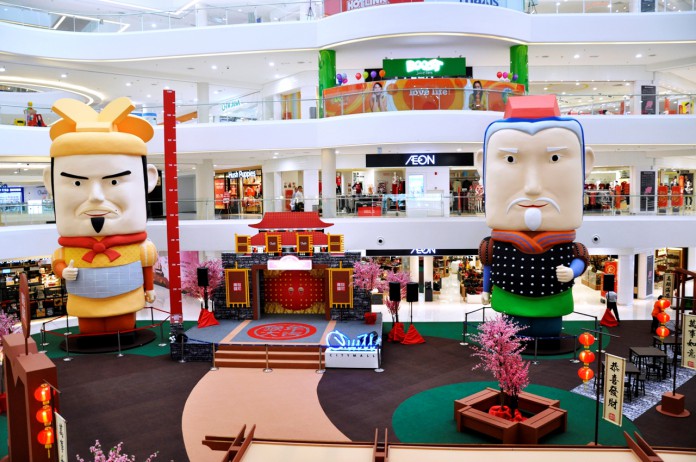 If you happen to visit Quill City Mall during this Chinese New Year (CNY) period, you will be greeted by two gigantic Terracotta generals that are two larger than life sized as you enter the main entrance. The two 30-feet tall Terracotta sculptures have been recognised by the Malaysia Book of Records for the “Biggest Styrofoam Terracotta Army Replica”.

When stepping into the main court of the mall, you would be transported back into the golden era of the old China province where the mighty warriors await. You will be enchanted by lively decorations and ancient Chinese village themed stalls filled with Chinese New Year offerings. Step over to the East Court to be awed by the life sized Chinese Chess, and head over to the North Court to take photographs of the mighty warriors in 3D art.

In conjunction with the celebration of this CNY, Quill City Mall is giving out special gift redemption opportunities and offerings to all the shoppers, among others, as follows:

Exciting CNY activities line up at the mall on every weekend from January 23 to February 22, 2016:

During the launch of its Mighty Terracotta themed CNY on Jan 20, 2016,  Quill City Mall hosted 89 senior citizens from Rumah Victory, Ti-Ratana Welfare Society, Rumah Sejahtera Seri Setia and Rumah Charis, and entertained them with the performances as well as treated them to a sumptuous meal, followed by a fun karaoke session thereafter.