Home Lifestyle Festivals How this Kluang Homebaker found success in selling mooncakes across Malaysia and... 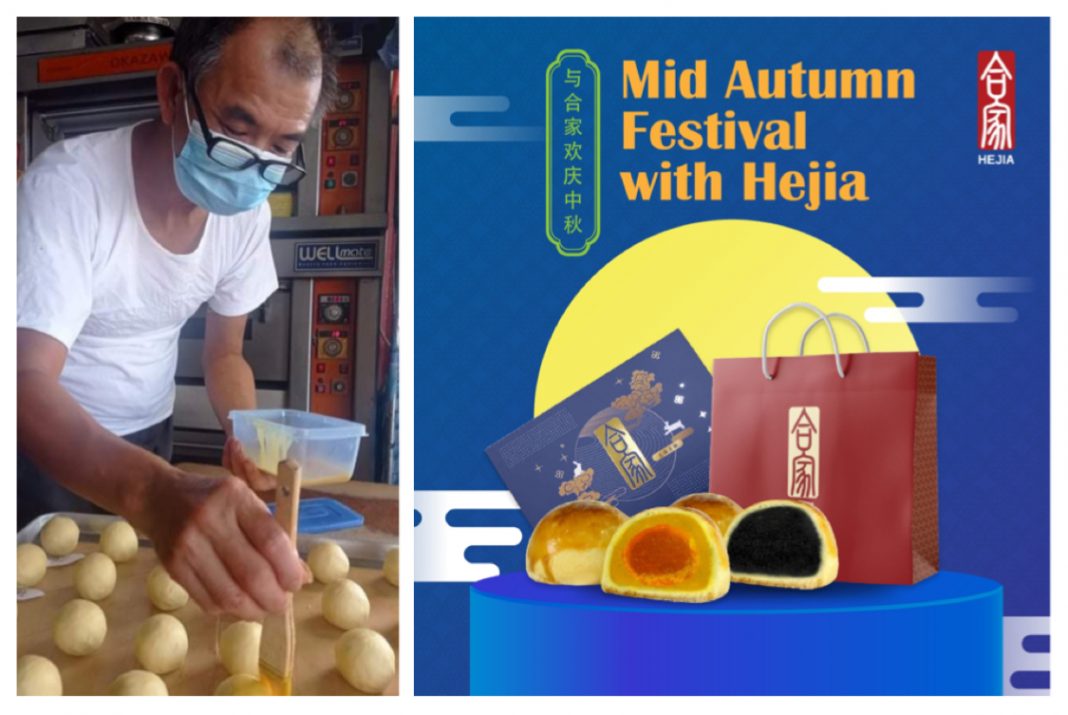 Working with yeast, butter and flour is second nature for the 57-year-old Johorean homebaker, Ho Soo Yong (何子雄). 30 years ago, Ho started a neighbourhood bakery from a humble stall in Kluang, a small town nestled in central Johor. Ho decided to expand his business online some five years ago, with a line of Chinese traditional delicacies such as Bak Chang, Bak Kwa and Shanghainese mooncakes, through the online marketplace platform, Shopee. Today, his online business which is known to many as Hejia (合家) has received tremendous orders from across the country and even Singapore via Shopee.

With Mid-Autumn Festival just around the corner, we speak to Ho about his proud traditional baked Shanghainese mooncakes – as that was also the very reason that he took his business online. Ho shared how this delicacy is often perceived as a pastry rather than a mooncake and wants to challenge this perception by promoting his Shanghainese mooncakes to mooncake lovers.

According to Ho, the Shanghainese mooncake is slowly gaining popularity especially amongst the younger generation given its special crust and texture which is different from traditional mooncakes.

“Kluang is a small town where demands have already been met for the local folks. In order to let more people have the chance to taste our Shanghai mooncakes, we needed to reach a much larger consumer base and going online was the easiest option that was available to us. We chose Shopee when we were starting off because it did not require much capital to set up a store and start selling on the platform.”

However, it was no easy feat. The Hejia owner said, “E-commerce was a completely new business approach to us. All we had was the recipe and the skill to make mooncakes but we had to learn everything else from scratch.” Ho said they encountered many unforeseen challenges like crushed mooncakes, struggling to manage customer service via the online chat and many more.

“When we just started, we realised that the mooncakes could not be delivered via normal courier postage as the mooncakes are very fragile and they would be crushed by the time customers receive them. So, we had to complete the last mile deliveries by ourselves and due to delivery limitations, we were only able to serve customers in Klang Valley initially,” he added.

Therefore, in an effort to resolve the issue, Ho spent a year improvising the packaging box to one that was sturdy enough to withstand normal courier services.

“We invested in better vacuum pack machines and good quality vacuum packaging. Today, we are proudly delivering Hejia throughout Malaysia and even Singapore,” Ho said, adding that he now clocks in an average five figure monthly sales online.

Last year, the bakery sold about 600 boxes of mooncakes during Shopee’s Mooncake Festival. The orders were so overwhelming to a point where they had to stop taking in orders to cope with the demand without neglecting the quality of their baked goods.

Hejia will once again be participating in Shopee’s ‘Celebrate Mooncake Festival’ campaign that will take place on September 12th. He said, “This time, we are well prepared for the campaign and have projected a four-fold increase in sales.”

If you are searching for Shanghainese mooncakes, do give Hejia a try. Each box is priced from RM52.90 and comes in a serving of six. There are seven flavours from lotus, red bean to green tea and even durian. Salted egg yolk lovers can have them added on for a richer and more sensational taste.

On September 12th, mooncake fans can take the opportunity to redeem 15% discount and 10% Coin Cashback vouchers when they purchase mooncakes from Hejia or other participating brands such as Hilton, Hai Wai Tian Oversea, Purple Cane, JMM and more. Some brands like Yong Sheng are also throwing in attractive freebies like an adorable LED bunny lantern.