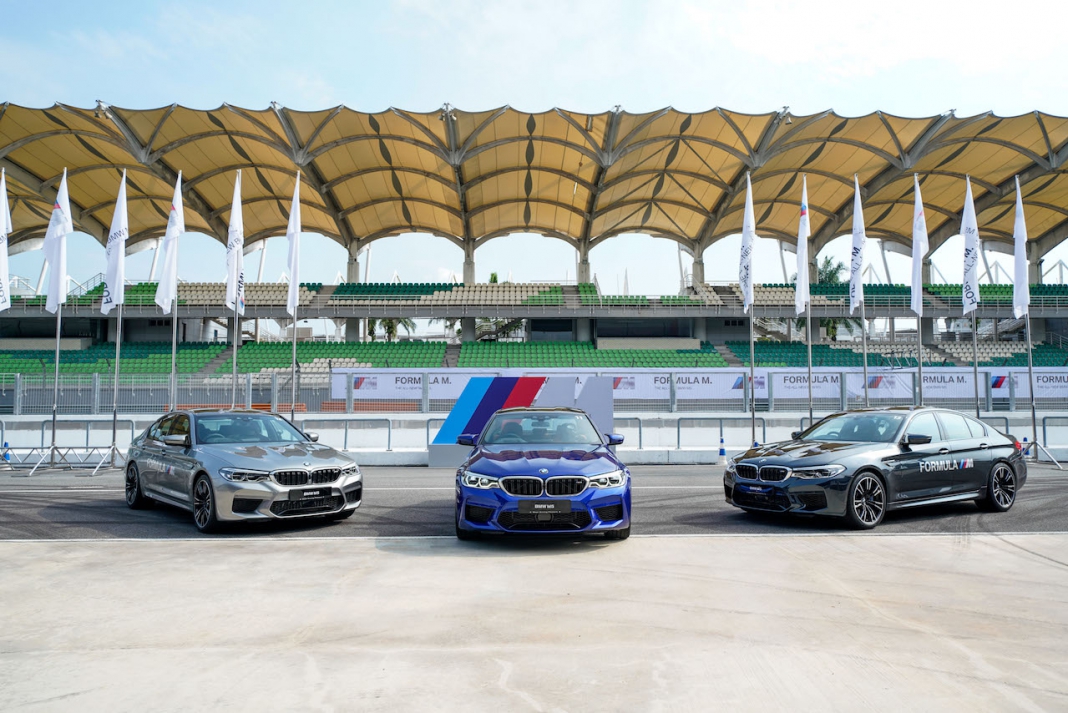 For the first time, the New BMW M5 powers through to new territory with the M xDrive all-wheel drive system with various modes customisable to suit the driver’s needs. The various M xDrive modes (4WD, 4WD Sport, 2WD) take the driving dynamics of the New BMW M5 to a whole new level. The 2WD mode even switches the car to rear-wheel drive for the ultimate driving experience.

In its design, the newly developed front bumper trim with larger air intakes is tasked to keep the cooling systems and brakes sufficiently supplied with cooling air, especially when put to the test on the race track.

Aluminium is used to manufacture the bonnet; whose precise lines carve an eye-catching sculpture and extend visually in the shaping of the roof. The roof, meanwhile, is made from extremely lightweight, high-strength carbon fibre-reinforced plastic (CFRP).

The rear diffuser has also been redesigned. Together with the side skirts, the M rear apron and M rear spoiler do their bit in giving the New BMW M5 its powerful sporting appearance, and the exterior mirrors have a dynamic, M specific design. The hexagonal central air intake in the front end not only separates itself sculpturally from the side air intakes, as it also incorporates the oil cooler, further reinforcing the form following function concept.

The 4.4-litre V8 engine with BMW M TwinPower Turbo Technology is now more potent than ever, and the high revving power unit in the New BMW M5 delivers an exceptional output of 600 hp at 5,600 – 6,700 rpm, while the tremendous peak torque of 750 Nm is on tap from just 1,800 rpm and remains constant all the way up to 5,600 rpm. In comparison to the outgoing model, maximum torque has been increased by 70Nm. The engine characteristics can be changed with the push of a button from the default Efficient setting to either Sport or Sport Plus, resulting in an even more willing response to movements on the accelerator.

The car’s impressive performance does not stop there. The New BMW M5 sprints from 0 to 100 km/h in just 3.4 seconds. A whole range of enhancements have also been implemented by BMW M engineers to endow the twin-turbo V8 with its phenomenal performance capabilities. These include newly developed turbochargers and a higher maximum injection pressure of 350 bar, which allow for shorter injection times and improvised atomisation of the fuel for sharper engine response as well as more efficient mixture preparation.

Further improvements encompass the lubrication and cooling systems, including an oil pan with a small front sump and indirect charge air cooling, which exceeds the efficacy of its predecessor despite taking up less space. The oil supply system uses a fully variable, map-controlled pump and has been designed for outings on the race track, where it has been made to handle high levels of longitudinal and lateral acceleration.

Furthermore, the twin-turbo V8’s power is channelled to the road via the newly developed M xDrive all-wheel-drive system. This is achieved by bringing the front wheels into play when the rear wheels are unable to transmit any more power to the road and an additional tractive force is required. This then allows the car to be controlled with ease by the driver, paving the way for an extraordinary experience of the business sedan’s phenomenal performance.

For those on the more ambitious spectrum, they can configure the M xDrive at any time to suit their needs. The driver can choose from five different configurations based on combinations of the Dynamic Stability Control (DSC) modes (DSC on, MDM, DSC off) and M xDrive modes (4WD, 4WD Sport, 2WD).

In the basic setting with DSC and 4WD activated, the system permits a certain amount of slip at the rear wheels when accelerating out of corners, giving the New BMW M5 its sporting agility. In the M Dynamic mode (MDM, 4WD Sport), M xDrive allows easily controlled drifts. The three M xDrive modes with DSC switched off were conceived to satiate the appetites of keen drivers primarily for use on the track. Drivers can choose from three configurations including pure rear-wheel drive (2WD). This mode gives drivers the freedom to pick their own drift angle and offers connoisseurs driving dynamics in their purest form.

Power is transmitted through the new eight-speed M Steptronic transmission with Drivelogic, which is operated sequentially via the new, short gear selector in S mode, or manually via paddles on the steering wheel. The D button allows the driver to choose between three Drivelogic modes; Mode 1 for efficient and comfortable driving, Mode 2 for shorter shift times, and Mode 3 for extremely short shift times in a racing set-up. The short shift times and optimal ratio spacing will keep even the most demanding driver happy. The wide ratio spread of the eight-speed M Steptronic unit helps to optimise fuel efficiency as well.

A new dimension in driving dynamics.

The team tuning the New BMW M5 chassis only had one goal in mind – unbeatable driving dynamics with maximum directional stability. This took place in part on the company’s own race circuit in Miramas in the south of France, and the world’s toughest test track, the Nϋrburgring Nordschleife.

Sophisticated stiffening elements in the front and rear structures ensure the body structure is extremely rigid and provides instantaneous feedback. The driver can also choose from Comfort, Sport and Sport Plus modes for the Variable Damper Control (VDC) system, which has M-specific tuning and M Servotronic steering. The two M1 and M2 buttons on the M leather steering wheel can be used to store two set-ups combining the driver’s preference of engine, transmission, suspension and M xDrive modes, the DSC mode and Head-Up-Display settings. The preferred set up can then be activated with just a press of the relevant button.

The New BMW M5 is fitted standard with M compound brakes, which are lighter than the conventional grey cast iron offering and therefore also reduces the car’s weight. With blue-painted six-piston fixed callipers at the front and single-piston floating callipers at the rear, plus perforated, inner-vented brake discs all around, the M compound brakes have the speed shedding power to befit the car’s dynamic potency.

The Driver at the core.

The New BMW M5 sets the benchmark for interiors in the executive sedan segment. This includes innovative infotainment concept as well as outstanding functionality with features such as BMW Navigation Professional 10.25” with Touch Display capability, BMW Head-Up Display with M-Specific Content as well as the full suite of BMW Driver Assistance systems as part of the BMW ConnectedDrive features.

All switches and buttons can be operated with optimal ergonomic convenience, and all of the New BMW M5’s functions are sited directly in the driver’s line of sight. The large digital instrument cluster has an M-specific design and keeps the driver informed on the driving dynamic mode, M xDrive all-wheel-drive system’s setting and Drivelogic option currently engaged.

For sporty drivers, the variable rpm pre-warning field and shift lights that show the best time to change gears when in manual shift mode, can also be reflected on the M-specific Head-Up Display. Virtually all the driving dynamic systems can be configured using the central touch display, buttons on the centre console or M sports steering wheel, and the central information display offers Gesture Control. The red starter button stirs the New BMW M5’s engine to life.

The New BMW M5 comes standard with the new M multifunction bucket seats trimmed with Merino leather, which further emphasises the car’s luxurious sporting appeal. The driver and front passenger seats are also fitted with multifunction adjustments, but the most prominent are the visually integrated and illuminated M designations embossed on the headrests to denote the speciality of the premium sedan from BMW M. Seat and upholstery choices include a two-tone combination of Aragon / Black and complete Black matched with interior trim finishers in Aluminium Carbon structure with Dark Chrome highlight.

BMW Group Malaysia also offers step-up options to the standard offerings on the New BMW M5 in the form of the Performance Pack, Advanced Safety Pack and Entertainment Pack.

The retail price (on the road, without insurance) for the New BMW M5 is RM 942,759.86 with the following additional options:

For more information on the new BMW M5, visit bmwgroup.com.